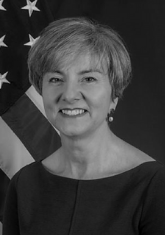 Jennifer DeWitt Walsh, a career member of the U.S. Foreign Service, assumed her position as Consul General at the U.S. Consulate General in Amsterdam in July 2019.

Prior to her arrival in Amsterdam, she served for three years as the Director of the Special Issuance Passport Agency. Her Department of State career encompasses a variety of assignments, including consular tours at the U.S. Interests Section in Havana, Cuba, and at U.S. embassies in Caracas, Venezuela, and Kingston, Jamaica. She served in a management position in Shanghai, China, as the Public Affairs Officer at the U.S. Consulate General in Lagos, Nigeria, and as the Deputy Principal Officer at the U.S. Consulate General in Alexandria, Egypt. Her domestic assignments include serving as a Senior Advisor in the Office of e-Diplomacy and as an instructor at the Department of State’s Foreign Service Institute.

Jennifer was raised in Wyoming and still calls the Equality State home. Before joining the Department of State, she served on the staff of U.S. Senator Malcolm Wallop, taught history at an international school in Medellín, Colombia, and worked as a professional historian. She holds a B.A. in History from the University of Wyoming, a B.S. in Education from Montana State University, and an M.A. in Public History from Arizona State University. She is married to a retired Foreign Service Officer and has two children.